​"This world is full with brave and honest performances, but not quite like this,.. We live in a time when women STILL cannot speak many truths without being morally, personally, socially bludgeoned, but if you are seeking inspiration to not only “speak” the truth, but “live” the truth … You MUST see this show." WIN - Writers Innovative Network

​"Nothing is off limits here as she explores love, lust, desire, betrayal, and brutality. She relishes in the telling of her tale. Her words are courageous and ​her performance is revelatory and joyous to watch."​
​TheatreReview.NYC

What people are saying about
​Perfect Love:

"I was completely immersed!!"

"Wonderful writing and beautifully performed. When you screamed 'Mom,' I froze!"

"I loved the shifts between young you, adolescent you, and grown up you."

"Perfect Love is fabulous. So witty and raw and poignant !"

"This piece was brilliantly conceived and portrayed. honest, insightful, humorous, compelling, poignant, riveting. Every moment was completely real and raw."

"Linda Manning’s Perfect Love is seamlessly told and beautifully performed. The truth laid bare without a single false moment. A triumph of the human spirit and a riveting night of theatre. My only regret is that we didn’t do more shows because we sold out every night and could have sold many more."
Don Creedon - Artistic Director of Poor Mouth Theatre Company 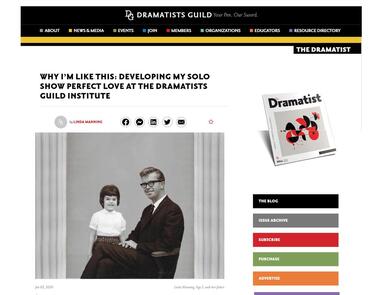 Check out Linda's article on
The Dramatists Guild blog:
Why I'm Like This: Developing My Solo Show
"In the early fall of 2017 I opened a Dramatist Guild eblast and chanced upon an offering from the DGI on how to create a solo show taught by Gretchen Cryer. Here it was: the opportunity to start this project, with some help from an esteemed professional, in a structured environment with deadlines and hopefully some kindred spirits. At that moment I was not thinking about how exposed I would feel performing the piece, that was a vague future. I just needed to write it! I had finally reached the point in my life where I was eager to get the story down, see it in front of me, outside of me. I had told very few people about my upbringing, it had lived quietly, alone in my head for too long."
SAG/AFTRA
AEA
Reviews of Linda's work:
​
"Such an unusual play. Very skillfully crafted.... Beautifully written sexual encounter. The writer bore her soul. She knows the grasp that love can have. Like being possessed by a mysterious, exciting energy of the other."
There Is No You and Me - full length stage play
New Works of Merit Playwriting Contest
2017 Finalist
​
"Breathtaking, poignant, and lovely, LEARNING TO DRIVE should be a strong contender for the industry's attention and interest... A spiritual and chronological successor to nostalgic feature masterpieces like THE VIRGIN SUICIDES and ALMOST FAMOUS, LEARNING TO DRIVE is an accomplished, market-ready script ...."
Learning to Drive - feature length screenplay by Linda Manning
The Black List, Featured Script 2015
Grand Prize Winner - StoryPros Awards Screenplay Contest 2013

​​“Yes, Linda Manning can make this stuff up and indeed it does not get much better than this well-constructed play...."
Bite the Apple - full length stage play
David Roberts, Chief Critic, Theatre Reviews Limited, New York, NY

"The ensemble of actresses are remarkable, particularly the evocative and nuanced performance by Manning. Bite the Apple is a smart script with intricate dialogue and beautiful language...."
Bite the Apple - full length stage play
Joseph Samuel Wright, Theatre Is Easy, New York, NY

"Writer-performer Linda Manning gives us a fiercely intelligent  and sexual Charlotte Brontë....   The writing delicately  renders the conflict between family responsibility and the artist's calling, between romantic yearning and the realities of married love."
Do Something With Yourself! - full length stage play
The Village Voice, New York, NY

"This wonderfully quixotic piece by Linda Manning explores the struggles Charlotte faced, including her own stifling romantic ideals. With a striking level of skill and versatility,"
Do Something With Yourself! - full length stage play
TimeOut New York, New York, NY

"The Invisible Theatre Company’s adaptation of the classic tale is strikingly fresh, thanks to playwright Linda Manning’s bold vision.... Manning had a dynamic presence .... Deftly handling the madness that lies at the heart of Poe’s tale, Manning oscillated from a petulant little girl, to a proper young lady, to a disturbing sexual force.... The amount of humor that Manning has incorporated into the script, without compromising its horror, is one of its greatest accomplishments.”
Adaptation of Edgar Allan Poe's The Fall of the House of Usher - full length stage play
The Off-Off-Broadway Review, New York, NY