SCREENPLAYS
click on the titles for more information and sample pages

Learning to Drive (feature)
A coming of age tale set in the 1970's -- An introverted teenage girl tries to escape her abusive home when she lies about her age and gets a summer job at a local golf course where she falls into a secret love affair with a thirty year old disgraced golf pro.

Charlotte  (feature) ​
Charlotte Bronte, brilliant, paralyzingly shy, and desperate to break away from her restricted, provincial life publishes her writing under a male pseudonym and then must fight to claim her identity on her own terms.
​
Best Feature Screenplay 2021 - City of Angels Women's Film Festival
Divine Food (feature)
A forty year old former rock singer, having buried her artistic life to devote herself to her husband and children, falls in love with the alcoholic butcher at her grocery store who was once a great musician and risks everything in order to regain her voice. 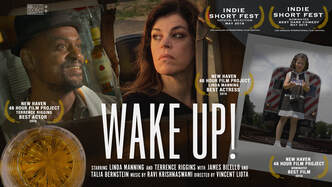 Wake Up  (short)
Opal has been staring at half a picture her a whole life; but who is the stranger staring back? Skate has been living in the same place his whole life. When Opal returns to confront her past, she and Skate reconnect, and then an undone shoelace unravels everything.​​​Finalist - Best Dark Comedy - 2019 Los Angeles Int'l Indie Short Fest
Official Selection - 2019 New Haven Int'l Film Festival
​​Winner - Best Actress - Linda Manning 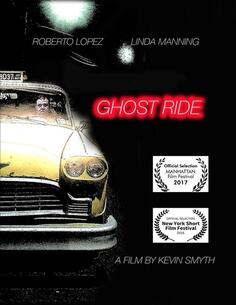 Ghost Ride  (short)
​An alienated New York City cab driver picks up a desperate fare who takes him on a ride of reawakening.
Produced and Directed by Kevin Smyth

STREAMING SERIES
Linda's Jazz Nights (one hour drama) -- After the mysterious disappearance of her husband, Linda - a jazz singer who sacrificed her career to raise three kids - struggles to save her Bronx Jazz Club, and maybe herself. If only she can stave off nasty creditors, sexy musicians, and her own worst instincts.
STAGE PLAYS 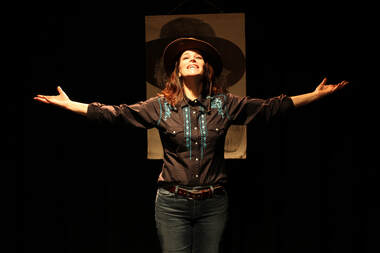 Perfect Love (solo show)
Why does a woman with a loving husband and two kids suddenly find herself unbearably anxious, unable to sleep, and her only comfort an old poster of Robert Redford? Linda tracks her evolution from a rootless girl to a teenager surrounded by predatory, abusive men, to a reckless woman on the hunt for perfect love with every dangerous man she meets.

Bite the Apple  (full length)
​A modern day Cinderella, in the middle of a full blown crisis, is thrust into the stories of Red Riding Hood, Snow White, and Rapunzel exposing their emotionally treacherous stories of sexual abuse, abandonment, and betrayal, unearthing her own past she has tried to forget, and discovering the possibility of a new story, of her own making.2021 Cafe Royal Cultural Foundation Grantee
Finalist - Kentucky Women Writers Prize - 2019

There is No You and Me (full length)
A married woman walks into a bar...to reclaim a piece of her past. Can she put an old lover to rest and reinvent herself, or is this a ghost story destined to be repeated?

GUY (full length) -- Guy, a successful truck salesman in his mid-sixties, is dying. When his estranged, middle-aged daughter shows up at his door full of self doubt having followed in his footsteps and become a wandering, rootless Cowboy herself, Guy must face the real world consequences of his actions.  Will he be able to save her before it’s too late? 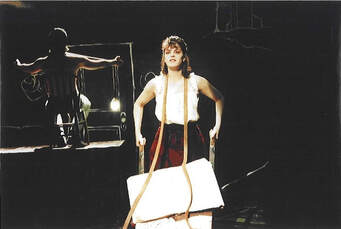 DO SOMETHING WITH YOURSELF! The Life of Charlotte Brontë  (full length)
The story of Charlotte Brontë’s emergence as a world class novelist as she carves out her own path between the provincial constrained existence of her Victorian reality and the fantasy world of her novels where so much more is possible.

The Fall of the House of Usher (full length)
An adaptation of Poe's mysterious and fantastic short story -- mad, reclusive Roderick Usher, obsessed with this twin sister Madeline, lures his oldest friend, William, to visit him in his haunted mansion (played by four dancers). William falls in love with Madeline and attempts to free both brother and sister from their tortuous bond.

Produced by The Invisible Theatre in NYC
Contact Linda at LindaSManning at gmail.com